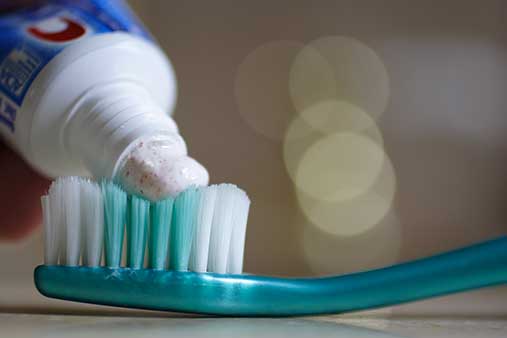 The History of Toothpaste

The History of Toothpaste

Our ancestors determined that oral cleaning meant better oral and dental health dating back to 3500-3000 BC, when the Babylonians and Egyptians fashioned early forms of toothbrushes by fraying the ends of twigs. And long before the predecessor of the toothbrush was engineered, as far back as 5000 BC in ancient Greece, people were using tooth powders to practice oral hygiene. People have been thinking of dental care long before dental clinics were established.

Recipes found for the earliest toothpastes were composed mainly of ground ox hooves, eggshells and pumice, with a little myrrh added for flavor. This was a very abrasive mixture. Fortunately tooth enamel is the hardest substance in the human body, far harder than bone, and harder even than steel.

The predecessor of the toothbrush, usually a twig with the end frayed, added to the improvement in oral hygiene around 3500 B.C. Again it was the Egyptians who developed this innovation. The Chinese also used sticks made from aromatic trees, which helped with bad breath.

Different cultures used other abrasives as toothpastes. The Greeks and Romans, preferred using crushed oyster shells and bone for their abrasives toothpaste mixtures. They also added ground charcoal and various types of bark to sweeten their breath. The Romans were reputed to have included urine in their toothpaste. And the Chinese incorporated mint and ginseng with a pinch of salt.

Advancements in the Middle Ages

Not much in the form of improvements developed throughout the Middle Ages. A dental checkup usually consisted of emergency dental care such as pulling rotted teeth, which was considered the earliest form of oral surgery.

After the Industrial Revolution

Then came the Industrial Revolution and people began making improvements in all aspects of life, including oral hygiene. Prior to the 1800s, toothpastes were powders to which people added water to make a paste. In 1824, the first innovation in toothpaste in centuries came when a dentist named Dr. Peabody added soap to tooth powder. In the 1850s, Dr. John Harris included clay in his formula, producing a stable toothpaste. This toothpaste became popular and was sold in jars. Mass production of toothpaste didn’t begin until 1873.

In 1892, Dr. Washington Sheffield introduced toothpaste in a tube. Artists at the time were using paint that was sold in tubes, and Dr Sheffield brought this innovation to the dental industry. The spread of disease by bacteria was a concept newly understood during this time. And Dr. Sheffield rightly thought individual tubes would decrease the risk of disseminating disease causing agents.

The development of the toothpaste that we are familiar with today started in 1914, when fluoride was added to toothpaste, increasing its efficacy in preventing cavities. Toothpaste in collapsible tubes was being mass produced. In industrialized nations, parents were teaching their children to practice good oral hygiene by brushing both morning and night.

World War II resulted in a shortage of lead and tin, which disrupted the production of metal toothpaste tubes. As an alternative to the metal tubes, plastic tubes were developed. At the same time, the soap ingredient that had been added to toothpaste was replaced by synthetic emulsifying agents that worked much more effectively.

In the 1950s and 60s, dental care became an important focus of healthcare for the first time. The concept of a routine dental checkup was only popularized in the 1960s, if you can believe it!

With the influence of Hollywood actors and actresses and their brilliant white smiles on TV and movie screens, a trend developed of people desiring whiter teeth. In response to popular demand, the first toothpaste containing whitening agents was introduced at this time.

Modern toothpaste is more pleasant to use than it was in centuries past. But toothpaste is only part of the care our teeth need. Routine cleaning every six months can be done at Midtown Dental Clinic Saskatoon. Our clinic offers a variety of oral hygiene solutions and whitening methods to compliment your homecare oral routine. The Saskatoon dentists at Midtown Dental Clinic are capable of guiding you through all of your dental needs, including emergency oral surgery for tooth extractions. Midtown Dental also has dentists who offer expertise in general pediatric oral health. Whatever your dental concerns, the team of Saskatoon dentists at Midtown are ready help.

Call our Saskatoon dental clinic at Midtown Plaza for an appointment today.

This article is intended to promote understanding of and knowledge about general oral health topics. It is not intended to be a substitute for professional advice, diagnosis or treatment. Always seek the advice of your dentist or other qualified healthcare provider with any questions you may have regarding a medical condition or treatment.

Come Visit Us In Midtown Plaza

Copyright Midtown Dental. All Rights Reserved.
Designed in Saskatoon by